“The second quarter of 2019 developed very positively for us, with sales growing 15.7% currency-adjusted and EBIT increasing 39%. All divisions and all regions saw healthy improvement. New styles of footwear sold well, apparel continued to be strong, replenishment orders for both apparel and footwear developed well and our direct-to-consumer business also performed well.With this development in the first half-year and the current expectations for the second half, we have slightly adapted our outlook for the full year, expecting revenues to now improve around 13% in constant currency and the full-year EBIT to come in between € 410 million and € 430 million.We would also like to mention that we are extremely happy with the cooperation with our new partner Manchester City and the entire City Football Group. The launch of their kits has been very successful and the initial sales have been higher than we both expected."

PUMA`s strong sales growth continued in the second quarter of 2019. Sales increased by 15.7% currency-adjusted to € 1,226.8 million (+16.9% reported). The Asia/Pacific and Americas regions continued to contribute with double-digit increases, while growth in the EMEA region was at a high single-digit rate. Both Apparel and Footwear showed strong growth in the second quarter, improving by 22.7% and 14.5% respectively, while Accessories grew moderately by 6.3%. PUMA experienced growth across the categories with Sportstyle, Motorsport and Golf showing the highest growth rates.The gross profit margin improved to 49.3% in the second quarter (last year: 48.6%). Positive impacts from channel and product mix, lower discounts and positive currency impacts led to margin improvements. Operating expenses (OPEX) rose by 16.5% to € 531.6 million in the second quarter. The increase was mainly caused by higher sales-related variable costs, including logistics costs as well as higher marketing and retail investments.The operating result (EBIT) increased by 39.4% from € 57.6 million last year to € 80.3 million due to a strong sales growth combined with an improved gross profit margin and a slight operating leverage.Net earnings increased from € 31.1 million to € 49.7 million and earnings per share were up from € 0.21 in the second quarter last year to € 0.33 correspondingly. 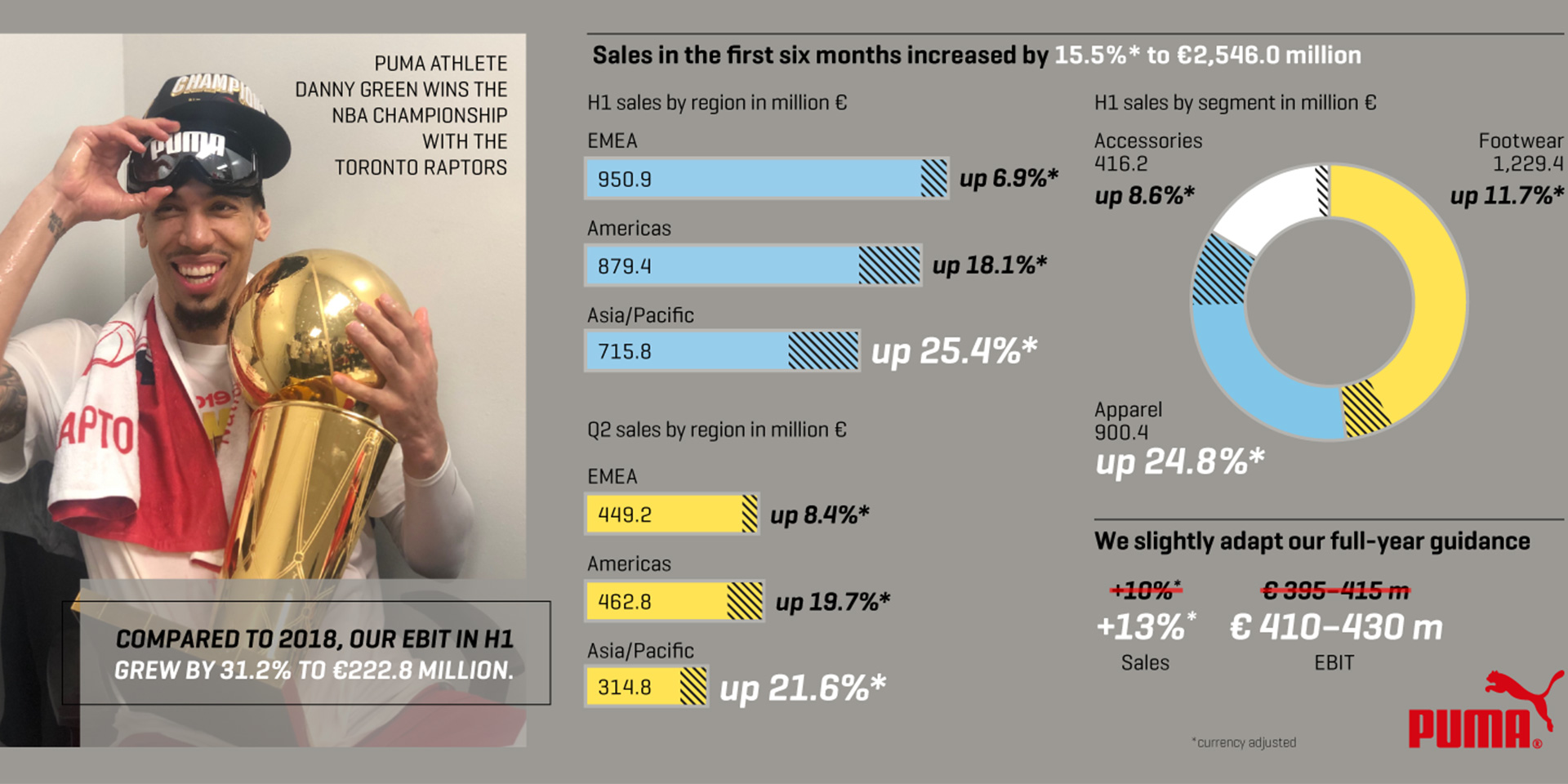 Sales for the first half-year 2019 rose by 15.5% currency-adjusted to € 2,546.0 million (+16.8% reported). The strong sales development was largely driven by double-digit currency-adjusted growth rates in Asia/Pacific, where China continued to be the main growth driver, and the Americas. EMEA was at a more moderate level with a mid single-digit growth rate. From a product division perspective, the sales growth was driven by double-digit growth in Apparel with an increase of 24.8% as well as in Footwear, which grew by 11.7%. Wholesale continued to drive growth with an increase of 13.8% currency-adjusted, supported by a strong performance of our key accounts. PUMA`s own and operated retail sales increased by 21.5% currency-adjusted to € 599.6 million including eCommerce. This represented a share of 23.6% of total sales for the first half of 2019 (22.5% in the previous year). The reasons for the rise are a like-for-like sales growth in our own retail stores, the expansion of our retail store network and a continued strong growth of our eCommerce business.The gross profit margin improved by 80 basis points from 48.4% to 49.2% in the first half of 2019. Positive impacts from channel and product mix, lower discounts and positive currency impacts led to margin improvements.Operating expenses (OPEX) increased by 16.6% and amounted to € 1,042.3 million. The increase was driven by higher sales related variable costs as well as continued investments in IT-infrastructure, marketing and our own retail business. The operating result (EBIT) grew by 31.2% from € 169.8 million last year to € 222.8 million in the first half of 2019 due to a strong sales growth combined with an increased gross profit margin and a slight operating leverage. This led to an improved EBIT-margin of 8.8% compared to 7.8% in the first half last year.Net earnings rose by 46.3% to € 144.1 million (last year: € 98.5 million). This translates into earnings per share of € 0.96 compared to € 0.66 in the first half of 2018.

Inventories were up by 19.4% at € 1,063.3 million due to the general sales growth, more retail stores as well as earlier receipts of products in order to balance supplier capacities and thereby avoid delivery issues. Trade receivables rose by only 11.2% to € 704.7 million. On the liabilities side, trade payables were up by 15.9% to € 740.1 million. This resulted in an increase of working capital by 15.7% to € 792.9 million.

The free cashflow in the first half of 2019 decreased slightly to € -104.4 million (1-6/2018:€ -97.9 million). This development was a result of higher capital expenditures and an increase of working capital, while earnings before taxes (EBT) improved significantly. In addition, the first-time application of IFRS 16 Leases had a positive effect on the free cashflow. Please refer to the Notes to the Interim Report for a detailed description of the effects of the first-time application of IFRS 16 Leases.

The second quarter of 2019 saw a continued strong increase of sales and profitability. As a consequence and based on our expectations for the remainder of the year, we slightly adapt our guidance for the full year 2019. PUMA now expects that currency-adjusted sales will increase around 13% (previous guidance: currency-adjusted increase of around 10%). The gross profit margin is still anticipated to improve slightly (2018: 48.4%) and we continue to expect that operating expenses (OPEX) will increase at a slightly lower rate than sales. The operating result (EBIT) is now expected to come in between € 410 million and € 430 million (previous guidance: between € 395 million and € 415 million). In line with the previous guidance, management expects that net earnings will improve significantly in 2019.

With the announcement of several new partnerships, PUMA had an exciting first half of the year 2019.In Football, PUMA signed its largest deal ever - both in terms of scope and ambition - teaming up with City Football Group, which includes reigning English Premier League champions Manchester City and a total of five teams on four continents. The new 2019/20 kits were successfully launched in July and exceeded any first day sales in the club’s history. In addition to the club, PUMA signed Manchester City’s iconic manager Pep Guardiola as a brand ambassador.We also announced that in Spain, starting in the 2019/20 season, we will supply the official ball used in all professional matches of LaLiga Santander and LaLiga 1|2|3. To expand our presence in Spanish club football, we entered a long-term agreement with Valencia CF, one of Spain’s most successful teams.Together with its existing partnerships, these new deals ensure that PUMA has a title contending presence in each of the key European football leagues.At the FIFA Women’s World Cup in France, we sponsored quarter finalist Italy and 78 individual players. To celebrate women’s football, PUMA launched the latest evolution of the PUMA ONE football boot as the PUMA ONE Trailblazer, exclusively worn by our leading female players. In other Teamsport events, PUMA team Denmark took the title at the Handball World Championships and PUMA athletes Rasmus Lauge from Denmark and Bjarte Myrhol from Norway were named part of the event’s All-Star team. Beyond that, PUMA team New Zealand won the Women’s Netball World Championships in Liverpool.In Track & Field, PUMA is already getting ready for the Olympic Games in Tokyo in 2020 and added several new athletes to its roster: world champion 400m hurdler Karsten Warholm, rising pole vault star Armand Duplantis, 2019 NCAA 100m and 200m champion Divine Oduduru, 2019 NCAA 100 meter hurdles champion Janeek Brown, long-jumper and sprinter Blessing Okagbare, high jumper Naoto Tobe and the Portuguese Athletics Federation.In Motorsport, PUMA entered into a long-term contract with Porsche to become the exclusive technical partner for racing gear as well as shoes, caps and luggage. As part of our vision to bring the track to the street, PUMA launched a separate collaboration with Porsche Design, for co-branded footwear, apparel, and accessories, aimed at the higher end of the market.We also partnered with W Series, the first racing competition for women, supplying high-performance racewear for all drivers.Our athletes continued to perform well at the pinnacle of Motorport, as PUMA teams won two of the most prestigious races on the calendar: Lewis Hamilton in the Mercedes AMG Petronas won the Formula 1 Monaco Grand Prix and Simon Pagenaud of Team Penske claimed victory at the Indianapolis 500.Adding to its leading offering in Motorsport, PUMA became the official trackside retail partner for Formula 1.PUMA’s first full NBA Basketball season after the company’s return to the sport last year saw the Toronto Raptors shooting guard Danny Green become the first PUMA athlete to win the NBA Championship since Isiah Thomas in 1990.PUMA launched its debut basketball shoe, the Clyde Court, in several new colorways as well as its second performance basketball shoe, the Uproar. Both products were highly visible throughout the NBA Season, the All-Star Game, the Playoffs, and the NBA Finals. In addition, we brought back a key heritage basketball style: the Ralph Sampson. The Ralph Sampson is a shoe with street style appeal and the initial response was very encouraging.In Golf, PUMA’s latest signing Gary Woodland won the US Open as his first major title and created a lot of media echo with his “star-spangled” IGNITE PWRADAPT golf shoes.In Sportstyle, the RS-X franchise continues to be a bestseller within the “chunky shoe category”, supported by the launch of the RS-X Trophy at the beginning of the year as well as by collaborations with MTV and Motorola. The Cali and Cali Bold, presented by PUMA’s ambassador Selena Gomez, were also among PUMA’s best-selling franchises in the first half of the year.On the operational side, we continued to invest in our distribution and logistical network as well as in organizational processes. In the first six months of 2019, PUMA added 33 (net) owned and operated retail stores while in China, our partners opened around 200 new PUMA retail locations. In August, we will open our New York flagship store on Fifth Avenue, which will be another milestone for our company. At the beginning of the year, we started working on our new multichannel distribution center in Geiselwind, Germany. Construction is on track and the center is expected to be operational in early 2021. In addition, PUMA North America announced the opening of a new distribution hub just outside of Indianapolis for 2020.

Textilereads.com is a comprehensive online resource for the textile industry. We strive to keep our readers updated on latest developments in materials, technologies and processes affecting the industry, through the delivery of news content, based on continuous research.READ ABOUT US

From Berlin to Shanghai: Intertextile Apparel to host FASHIONSUSTAIN conference